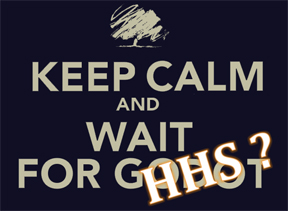 HHS updates the FAQ the day after we post the following.

It’s hard enough to get insurance companies to abide by The Law (otherwise known as the Affordable Care Act) when it comes to including licensed integrative healthcare professionals in their provider networks.

It is far worse when the federal agency most closely charged with ensuring compliance with the intent and directives of the law manages to scramble its meaning by guidance so poorly worded that the companies continue to exclude those providers.

(NOTE: The day after this was posted, the Dept. of Labor issued the long anticipated revised FAQ on implementation of Section 2706 whose history this post recounts. We are still evaluating its impact, as are many state providers and regulators, and will provide our analysis in the weeks ahead. — July 16, 2015.)

And when the Senate Appropriations Committee directs that agency – Health and Human Services (HHS) – to unscramble the guidance, but the agency fails to do so?

Houston (actually Austin and every other state capital): We have a problem: The agencies responsible for coordinating state compliance with federal health laws have ignored the directives of the Congress since 2013.

Is this Ignoring Congressional Intent?

April 2013. HHS issued an FAQ about Section 2706 of the ACA, the provisions that address discrimination against licensed providers in health insurance marketplaces (in other words: in each state where insurers are licensed to sell and service policies)

July 2013. The Senate Appropriations Committee rebuked HHS for misconstruing the law in the FAQ, and said: “The Committee directs HHS to work with DOL and the Department of Treasury to correct the FAQ to reflect the law and congressional intent within 30 days of enactment of this act.” (i.e.: by January 30, 2014)

Spring 2014. HHS and the agencies missed the deadline by 60 days, but issued a public “Request for Information” on the non-discrimination provisions of Section 2706. The public comment period closed in early June. HHS reportedly received more than a thousand responses.

July 2014. The Appropriations Committee reminded HHS that the agency had not complied with the directive of the year before and said: “The Committee expects the corrected FAQ by November 3, 2014, or an explanation for ignoring congressional intent.”

Nov. 3. Came and went without a response to the Committee.

Nov. 4. The election changed the leadership of all Senate committees from Democrat to Republican.

April 2015. The American Association of Naturopathic Physicians, AANP, one of many hundreds of organizations that replied to the 2014 RFI, (and a participant in the October meeting), requested a meeting with the agencies to get an update on the status of the response to the Committee. (At that point: More than two years after the release of the first flawed FAQ.)

In an email reply the director of the Division of Regulations and Policy, Office of Oversight, Center for Consumer Information and Insurance Oversight of the Centers for Medicare & Medicaid Service (CMS: which was given the job of coordinating the response to the Committee) said this:

“…We have nothing new to report since October in terms of publicly available information. We’re continuing to work on issues related to section 2706 with our colleagues at Labor and Treasury and also with State regulators.”

May 26. The Dept. of Labor releases the long awaited revision to the April 2013 FAQ. You can read it here. (Our analysis of its effects on reimbursement for integrative care services will be available soon.)

Out from Behind the Curtain Please

If the agencies are indeed working with the states as the response suggests we are unaware of it, and CoverMyCare is working hard to connect with and record the work of people and groups in each state who are collaborating to end insurer discrimination against licensed providers.

If CMS and the agencies are really working behind the scenes it is way past time to come out from behind the curtain. The newly configured leadership and membership of the Appropriation Committee may merely be annoying masters of oversight, but there are almost a half million small businesses across all the states and 30 million Americans who use their services who deserve to have “…an explanation for ignoring congressional intent,” and a new guidance that directs state regulators and insurance companies to comply with Section 2706.

If you know of CMS, HHS, Treasury or Labor engagement with state regulators, please let us know and we’ll add the details to our States Program pages.